THE ART PROJECT VISUALIZING INFORMATION OF TUVALU ON THE DIGITAL GLOBE

Build the Future with 10,000 Tuvaluan

Build the Future with 10,000 Tuvaluan by NPO Tuvalu Overview is an archiving project of portraits of people in Tuvalu. We made visualization of this archive on the Digital Globe, and constructed the communication system that users can transmit the message to people in Tuvalu.


In these contents, the Digital Globe is used as not only a satellite image viewer but also an interactive art form of portraits archive and geographical information of Tuvalu. The interface that dividedinto four altitudes hierarchies was designed by using kml (KeyholeMarkup Language) functions: 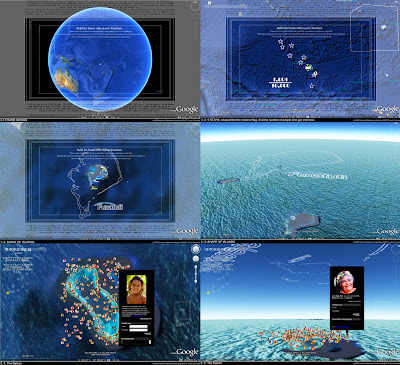 By this hierarchical interface design, users can understand the operation method and the message instinctively, without reading the explanation.

And also, these contents also support a function for transmitting message for Tuvaluans. 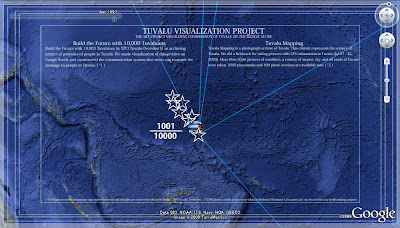 This function can be used only by the interface of the Digital Globe. Users can write a text message and send it into the balloon. When users send a message, A blue line is drawn from users' position toward Tuvalu.